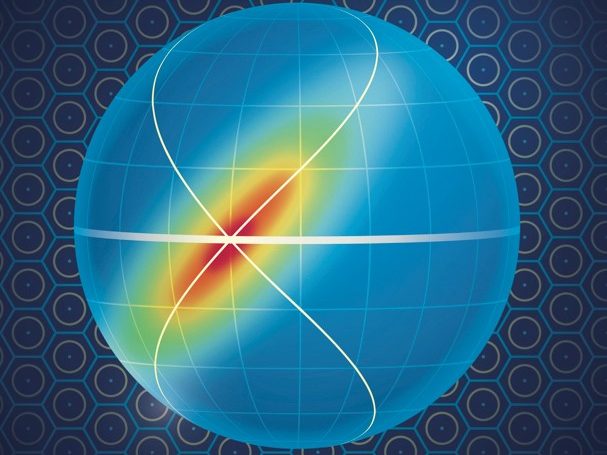 An entangled squeezed state in the Bloch sphere. Such states, that have been generated with ultracold atoms, allow to increase the sensitivity of atom interferometers and clocks. 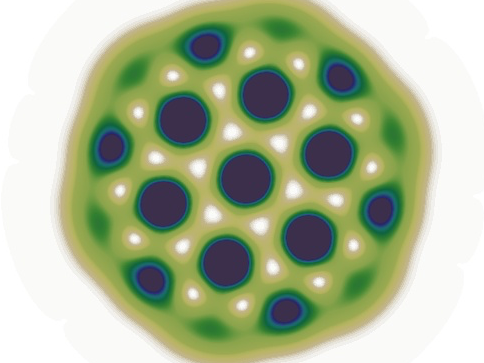 A 2D dipolar supersolid hosting a vortex lattice. The vortex lattice is forced into a honeycomb structure, instead of the usual triangular Abrikosov lattice.

The theoretical activities on quantum gases is carried out at the CNR-INO BEC Center in Trento and at the QSTAR CNR-INO group in Arcetri.
The common denominator behind the theoretical activities is the understanding of new dynamical and equilibrium phases of matter (such as quantum gases in optical lattices and reduced dimensionality, supersolid phases, topological defects, topological phase transitions, magnetisms in quantum mixtures, polarons and bound states, Josephson dynamical regimes, Anderson localization) through the investigation of their excitations and symmetries, their rotational properties, their coherence properties, their response to external probes, and their behavior at finite temperature.
While these theoretical investigations have been historically oriented to the study of fundamental aspects of ultracold quantum matter, in the recent years special attention has been devoted also to possible applications, such as entanglement-enhanced quantum technologies with a focus on sensing (with multiphase Mach-Zehnder interferometers with trapped atoms) and metrology (with coupled atomic clocks), and quantum simulators, ranging from the simulation of condensed matter Hamiltonians to the implementation of analog models of gravity.
A significant part of the theoretical studies is developed in direct collaboration with experimental groups at the national and international level. Long-standing and fruitful collaborations have been active in particular with the CNR-INO laboratories based at the BEC Center and at the University of Trento, at the University of Florence and at LENS, and in Pisa.