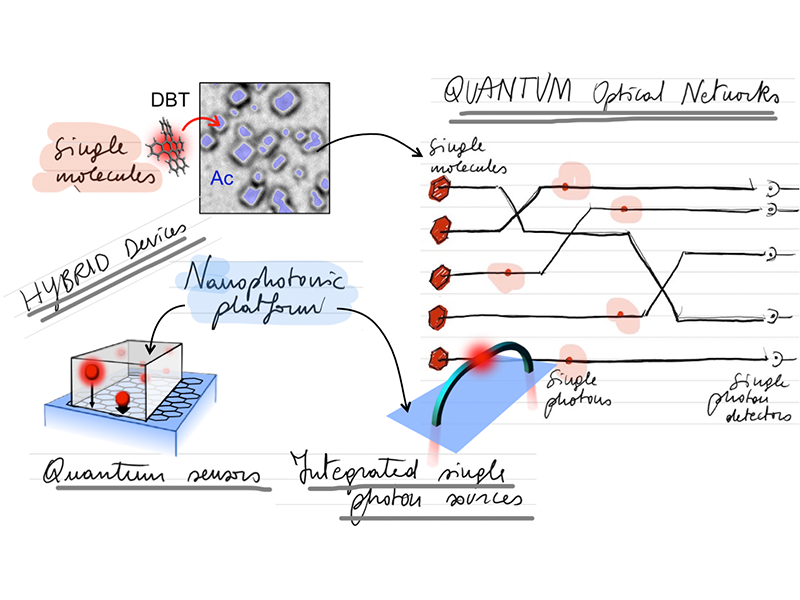 We like to study single quantum emitters in the solid state, both for fundamental reasons and for developing novel quantum technologies. In practice, we grow samples with organic chromophores, such as polyaromathic hydrocarbons, in the limit of single molecule concentration. These emitters are known to behave closely to a two-level system in the solid state [1]. However, it is only recently that their integration into hybrid nanophotonic platforms has been demonstrated. We have shown that single molecules can be coupled to silicon nitride waveguides on chip [2] and that they can also be assembled inside planar optical antenna for efficient redirection of fluorescence emission [3]. More recently, we have optimized a novel nanophotonic platform where single molecules are embedded within 3D polymeric structures, while keeping their excellent quantum coherence properties [4,5,6].<br /><br /><br />
The effective interaction between isolated molecules and the light field allows for their use as efficient single-photon sources for applications in quantum communication [7], linear optical quantum computing and metrology [8]. Besides their role in quantum optics, single molecules are employed in our labs as nanoscale sensors for electric field [9], material properties and optical transducers for other local parameters.<br /><br /><br />
We believe that organic materials, manipulated at the single molecule level, will have a key role in quantum technologies, similar to the one they play in classical optoelectronic devices.<br /><br /><br />
Our activities are currently funded by four different EU projects, ORQUID: Organic Quantum Integrated Devices, SIQUST: Single-photon sources as new quantum standards, FASPEC: Fibre-Based Planar Antennas for Biosensing and Diagnostics and STORMYTUNE: Spectral-Temporal Metrology with Tailored Quantum Measurements.